In a post from PHE in November 2018, the Government released its plans to launch a national cervical screening campaign starting this month.

The NHS Cervical Screening Programme has made a significant impact on cervical cancer mortality since it was established in 1988, saving an estimated 5,000 lives a year. 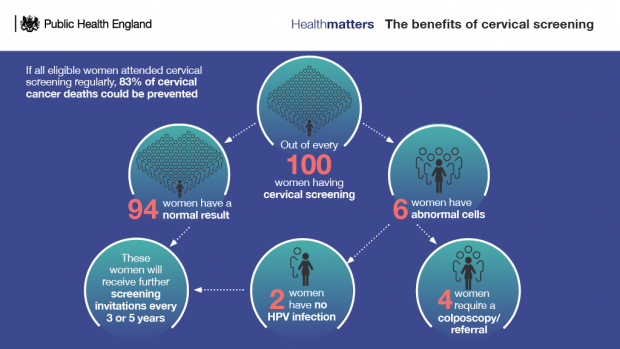 It is likely there will be significant media interest in cervical cancer in the early part of 2019 due to cervical cancer prevention week (21 to 27 January) and the 10th anniversary of the death of TV reality star Jade Goody, who sadly died on 22 March 2009.

The PHE campaign will support this interest. Deciding whether to be screened is always a personal choice and this campaign will aim to help more women understand and be less fearful of taking up the offer and improve cervical screening acceptance across England. Ultimately we hope this will help stop more women getting cancer unnecessarily.

Early this year, we started to explore the possibility of a national campaign focused on cervical screening.

To take this forward, the PHE screening team has been working with our counterparts in NHS England and the PHE Marketing team that leads on the Be Clear on Cancer programme of work.

In collaboration with academics and charities, PHE Marketing has been reviewing coverage data to determine which women to prioritise and how to best tackle the issue.

In addition, PHE Marketing has conducted research with women least likely to take up the offer to understand their point of view and what they would need.

The campaign will address a number of barriers to screening highlighted by this research.

Research also tells us that women feel empowered after getting screened and feel the need to protect and empower other women. 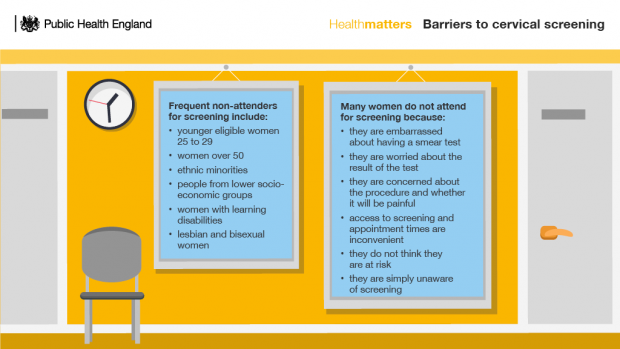 We have made sure the information in the campaign is up to date. Cervical screening is evolving and there are many important changes, including:

Hopefully all these developments will combine to mean that one day we will be able to say that it is possible that nobody should die from cervical cancer.

We do not know for certain what response the campaign will generate but this will be an excellent opportunity to improve women’s understanding of the test and see more of them choosing to take up the offer.

“The Be Clear on Cancer campaign will play a vital role in raising the awareness of cervical screening, as it’s a real concern that fewer women, particularly younger women, are taking screening up.

“We know that for some women worries about embarrassment or discomfort can put them off taking the test. We hope the campaign will make it clearer to them what the test involves so they can decide if it’s right for them.”

To find out more, visit blog.gov.uk

For UK HCPs only
Want to hear from us?